Restoring a Handplane With Electrolysis

I recently put my hands on a couple of vintage Stanley Planes. I purchased them used for very little money, and they were very rusty.

I used a process of electrolysis to remove the rust and bring them back to bare metal, and the results where pretty spectacular. If I believed in magic, I would certainly think that it was magical.

Here is the the Stanley #6 plane as I acquired it:

This particular plane was produced sometimes after 1933 and before WWII. The kidney bean shaped hole in the lever cap, the brass blade depth adjustment and the front tote color are this plane age giveaways, along of various other smaller details.

The plane was in good shape, but unfortunately it was covered in rust. The bottom (which I unfortunately I do not have a photo of) was completely red. The rust didn't ruine the integrity of the metal, but it made the plane pretty useless without a good restoration.

First step was to take the plane apart, separating all its parts so that they could be processed separately.

The second step was to remove the rust from all metal parts with electrolysis. Electrolysis is an electrochemical process that consists in connecting a metallic object - something rusty that you want to clean - to the negative pole of a battery changer and submerge it in an electrolyte such as water and washing soda. In the electrolytic process you call this object connected to the negative pole the cathode. The positive pole of the charger is connected to some sacrificial metal - rebars or an old coffee can or example - and also submerged in the electrolyte surrounding the object to clean. You call the sacrificial metal the anode, and it will get corroded heavily during the process. You don't want to screw up positive with negative here!! If you do instead of cleaning the object, you'll destroy it.

For this plane I used as an anode some rebars bolted to the sides of a plastic tub, and a steel plate sitting on the bottom. I suspended the plane with fishing line to ensure that it wouldn't touch the rebars or the plate, which is most important to avoid a short which would not only stop the process but also create an hazardous situation and most likely damage the battery charger.

It is important that the anode (sacrificial metal) and the cathode (object to clean) "see" each other. The process works only in a light of side. Whatever part of the cathode is not in line of sight with the anode, will not get cleaned.

For this plane I used a 12V 2A battery charger an I allowed the electrolysis to run for about 24 hours. The charger must be a cheap manual kind, and not a fancy automatic kind. Since you are not actually charging a battery, any smarts built in the charger will get in the way of the process.

Here is a photo of the plane body immersed in the electrolyte at the very beginning of the process. 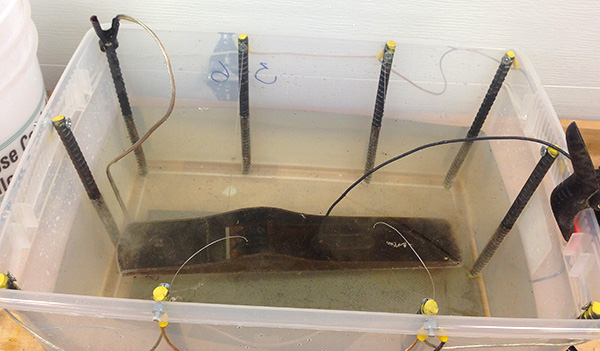 You might noticed the bubble coming out on the sides of the plane, and here is a close up: 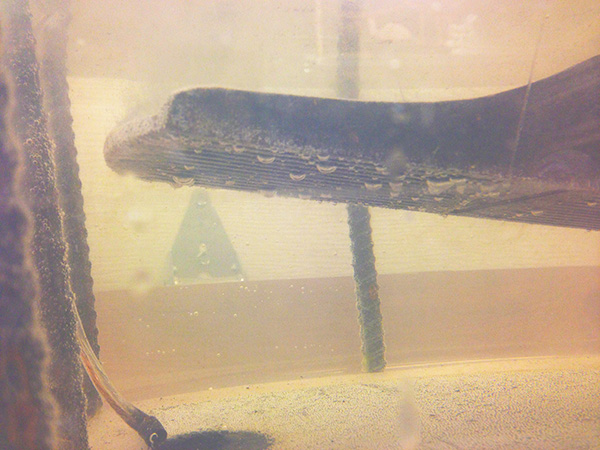 That's the hydrogen that is formed as product of the electrochemical reaction caused by the current. The rebars also release bubbles of oxygen. The result is a nice mix of oxygen and hydrogen that could become a nasty explosive if you let it accumulate. Ventilation is key to avoid dangerous situations and if you are ever going to do this, you should do it outside.

After the 24 hours bath, it took some brushing, re-painting and sharpening of the blade... and here is a good-as-new Stanley #6, tuned up, wicked sharp and able to take very fine wood shavings.

And the rust free corrugate sole:

The electrolytic process worked like magic and for a few dollars I ended up with a nice and functional tool that I'll use for many years in the workshop.

If you decide to do something similar to this, make sure to do your homework and read all you can about the process. There are many more details and safety considerations that you need to know before trying to do this.